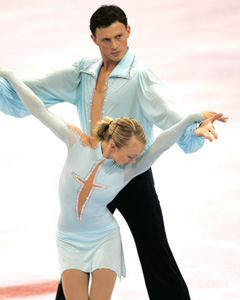 The preOlympic season Tatiana and Maxim have started in Pittsburg, at the first Grand Prix series competition, being current world champions. For them it was necessary not just to confirm the champion title, but also to prove that a victory at the last worlds is not lucky coincidence or as many sports editions have written, "a real misunderstanding", but the real application for Olympic gold medal. In this season the coach Oleg Vasilev together with the Canadian choreographer Lori Nichol has put two new programs: short Ave Maria and long on music Sheherazade by Rimski-Korsakov, deserved the highest estimations of the Russian experts. Both compositions have been complicated according to new requirements of the international judging.

Nobody has doubted that "Skate America" is the next gold medal for Totmianina nad Marinin: the structure of participants was too weak. Irreproachable execution of the short program only has confirmed the leading positions of Russians. Next day pairs should present their long programs. Tatiana and Maxim have initially pulled out happy for itself starting number - last. 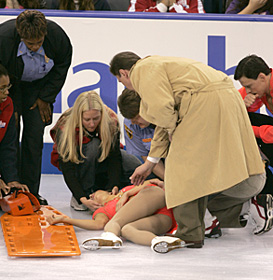 After enough diffident performances of contenders skaters went on ice (as usually) concentrated and ready to win. However, the circuit of luck has interrupted already on the first seconds of the program. A side-by-side jump - and Maxim passes a turn. The combination of jumps - again a mistake of the partner. Never caused doubts only twists and lifts. At that execution of these elements which usually show Totmianina and Marinin, guys still could apply for a gold medal. The first lift was made excellently, twists and throws were at the highest level. Last minute the long program skaters started the second lift named "hand to hand lasso" - the firm element of Totmianina and Marinin. Suddenly Tatiana loses balance and falls on ice a head downwards. The visitors has stood in horror. Maxim's face has shown despair and fear. Tania without any movement laid on ice. Oleg Vasilev, the coach of the couple, ran to her. A few seconds later doctors have surrounded the skaters. Totmianina has been carried away from arena on a stretchers and have sent in one of clinics of Pittsburg.

The brain concussion is accompanied by the loss of consciousness, vomiting, infringements of memory. Clinical attributes of a brain concussion regard as display of changes of physical and chemical properties of brain substance, colloid balance of cellular fibers as a result of sudden short-term increase of intracranial pressure during the moment of a trauma. At easy current is marked short-term loss of consciousness with the subsequent satisfactory condition. In heavier cases pallor of integuments, decrease in reaction of pupils on light, delay or increase of pulse, adinamia, a headache, dizziness, a nausea, vomiting, loss of memory on the events directly preceded a trauma are expressed.


Tatiana have delivered in branch of traumatology of local Mercy Hospital. After inspection in which leading doctors of the hospital have been participated, has been drawn a conclusion: the brain concussion, fortunately, without crises. To Tania have been made some injections, she has fallen asleep. The physicians estimated her condition as normal. Maxim and Oleg constantly were in hospital near Tatiana. The plots of terrible falling of Russian skater have flown through all TV channels of the world. Hospital where Tania was, was surrounded by journalists. "Let me not to make comments, - asked Maxim. - call Oleg Vasilev. I can only say, that Tania already have discharged from hospital".

"Doctors have forbidden her to skate at least two weeks. But maybe it is necessary to wait a month. I can tell in a week more precisely". - Oleg has told. Tania has come to the senses marvellously quickly. The first, that she has asked the coach when she regained consciousness after a doze of somnolent, whether they will have time to be prepared for the Cup of Russia. Next day the pair has given 12 (!) interviews to the American broadcasting companies.

The plots of terrible falling Tania did not look and does not gather to do it. Everything, what has happened on ice and the following two hours, she remembers badly. As they have waited for doctors, as the tribunes applauded and how she has appeared in hospital.

Since that has passed two weeks. It is difficult to believe that Tatiana already prepares for the Russian Nationals. To break a psychological barrier is the nain task for skaters. The help of the psychologist is necessary first of all to Maxim: he feels, that fault lays completely on him. Began with the most simple elements, with each training feeling themselves confident.

Whether it's not necessary to speak that in two months Tatiana and Maxim became three-time champions of Russia, in January have won Europeans making a personal best, and in March, in Moscow became the owners of, probably, the most important for today a title in the career - a gold medal of the world championships! Ahead - the Olympic Games in Turin. Totmianina and Marinin with their coach make gorgeous plans for the last season in amateur sports. But it already absolutely other story! 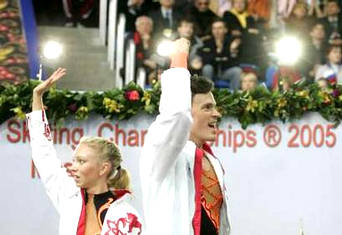