The shadow of Moskvina

Natalia Pavlova should be learned step by step Taniana and Maxim not only to technics of a pair figure skating and skill to feel itself to single whole. But even now Tatiana admits, that it not up to the end was possible to them.

Firstly Tatiana and Maxim were looked on ice as two singles. But each time programs of sportsmen all became more complex and more interesting. Natalia Pavlova experimented different styles. 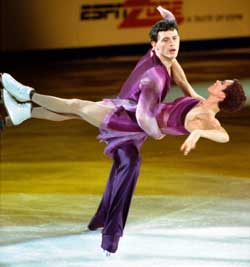 The good technics and pure lines of this pair were estimated also by judges. Since 1999 Tatiana and Maxim have got in combined team of the country, were in ten the best figure skaters in the championships of Europe and the World. But technical pair did not have not enough affectibility. During performances Tania and Max were so shy, that instead of smiles spectators saw only the masks which have stiffened from a pressure. Constraint of figure skaters was felt in each step. They could make all on trainings, but frequently supposed failures at competitions.

Already then at this pair looked as Elena Berezhnaya and Anton Sikharulidze's receivers. Tamara Moskvina offered to them to proceed in the group has become interested in Tatiana and Maxim even. Sportsmen did not object. But Natalia Pavlova has insisted, that pair which she lifted from zero, has remained with her.

After that incident of mutual understanding in collective any more was not. Emotional Natalia Pavlova could not forgive to pupils, that they carried on negotiations with Tamara Moskvina behind her back. And Tatiana and Maxim as if have forgotten, that the coach has helped them grow in a pair of a world scale. Work in collective was under construction not on mutual understanding, and on mistrust and insults. Once mutual friction have reached such apogee, that Natalia Pavlova has taken away directly from training in hospital.